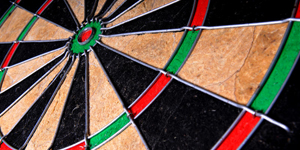 The Holland Sports B team finished a respectable 4th place in their league.

Want to join us?

All teams welcome new members and we have the facility to accommodate one new team on a Monday night, and two new teams on a Friday.

Get in touch with us if you would like to join one of the teams, or just come to the club to chuck some arrows for a bit of fun!

Both our dart boards have digital scorers, so don’t worry if you maths isn’t up to scratch, and house darts are available to borrow from behind the bar.